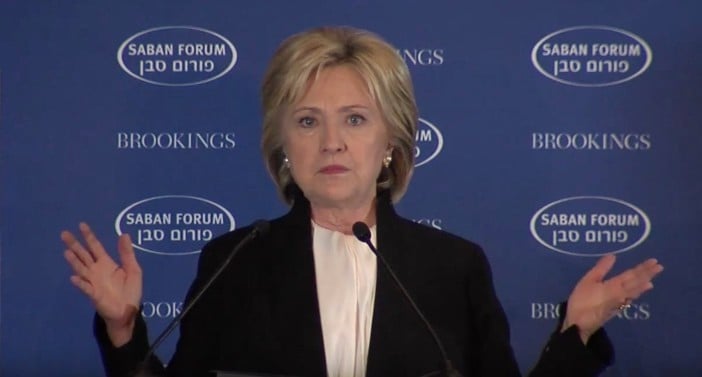 At the 12th annual Saban Forum hosted by the Center for Middle East Policy at Brookings Institution, former US Secretary of State Hillary Clinton spoke about the need for Americas to defeat the likes of ISIS and talked about how tech companies can help in the effort:

In her speech, Clinton said:

…it’s the nexus of terrorism and technology. We have a lot of work to do to end it.

… technology is a disruptive force that leads to an exponential increase in activity. ISIS is an exponential force right now. That’s why it requires us to bring together governments and high-tech experts to figure out how we disrupt [terrorist organizations].

Resolve means depriving jihadists of virtual territory just as we work to deprive them of actual territory. They are using websites, social media, chatrooms and other platforms to celebrate beheadings, recruit future terrorists and call for attacks. We should work with host companies to shut them down.

But Clinton is pretty vague about what the tech giants can do to defeat terrorism. Previously she suggested that encryption should be weakened to allow the government access to private Internet communications.

In her most recent speech, Clinton discussed dismantling ways and means that terrorists use to reach out to recruits. She has not yet delivered a concrete strategy on how to do so however, or even explain how it might work.

Of course many would argue that security agencies need greater powers to gather and act on intelligence, though it must be done without snooping on every citizen.

The tech companies can’t do it on their own, and of course Clinton highlights the fact that they need to collaborate with government agencies to tackle the terrorist threat online without affecting people’s rights to privacy.