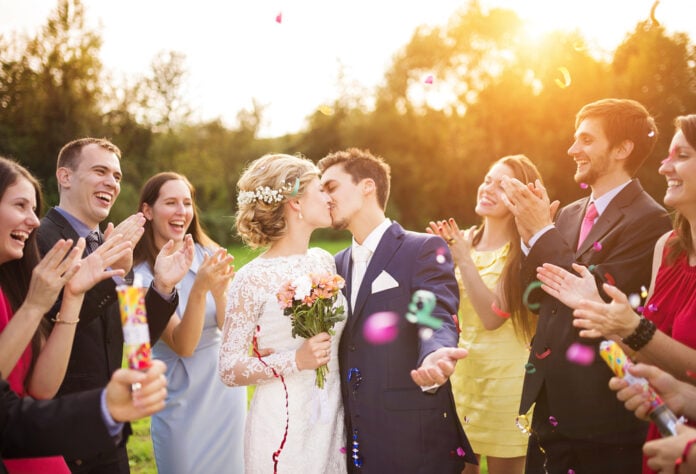 Whether you’re excited or nervous about attending your colleague’s wedding, there are some dos and don’ts to remember. After all, weddings aren’t just celebrations with family and friends. They also offer an opportunity for colleagues to get to know one another better and build on their friendship. So rather than worrying about what you shouldn’t do at a coworker’s wedding, spend more time thinking about how you can help make the day as memorable as possible for everyone involved.‍

Do Treat the Wedding as a Business Meeting

While the ceremony is a day to celebrate two people’s love, it’s still a business meeting. Be respectful and remember that you’re both in this together at the end of the day. So, don’t be too excited or thrilled because it easily comes off as tacky. At the same time, avoid being too cool, calm, and collected as that, too, could come off as cold and distant. Be yourself, but also be mindful of the non-work environment so you don’t do anything that could lead to awkwardness.

There’s nothing wrong with bringing a small token as a gesture of appreciation, but if you show up empty-handed, your colleague will think you’re not interested in the wedding. Instead, take some time to think about what kind of gift would be meaningful for your colleague’s wedding. For example, you can buy a gift card for a restaurant they like. A thoughtful gift also shows that you put effort into choosing it.

Do Arrive on Time

Even if you’re coming from far away or late, it’s still best to arrive in plenty of time on the day of the ceremony. Not only will this express that you care, but it’ll also allow you to get to know the couple better and be there if they need any help later. If you’re arriving late, don’t just walk in unannounced. It’ll send a poor message and could cause confusion and interruption during the wedding ceremony. Instead, wait outside until the ceremony portion is over, so you don’t distract anyone.

Your colleague has put a lot of effort into planning the wedding and reception, so it’s essential to find the requested dress code. If it’s a black tie event, you should wear formal attire, and if it’s a casual affair, you should dress down so as not to take attention away from the couple.

Do Stay for the Dinner Reception and Toast

Don’t skip out during the dinner reception and speeches. If possible, sit through the whole event. You don’t have to stay till the end of the night—even if it’s late, sticking around would still show that you’re interested in your colleague’s wedding. At the same time, don’t just sit there with your head down like you’re bored. Instead, be social and participate in the conversation while remaining respectful.

5 Creative Ways to Celebrate National Boss Day in Your Office