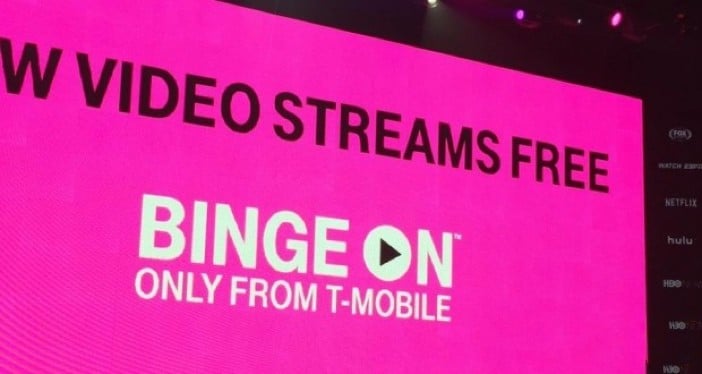 T-Mobile’s special “Binge On” promotion says it gives customers unlimited video streaming from a selection of websites including Netflix, but YouTube has taken issue with the offer.

Note: this story has been updated with more details at the end of the article, following information we received from T-Mobile.

YouTube has not in fact signed onto Binge On, and it says the mobile operator is throttling its traffic. “Reducing data charges can be good for users, but it doesn’t justify throttling all video services, especially without explicit user consent“, a YouTube spokesman told The Wall Street Journal in an article published on Tuesday.

T-Mobile has not yet confirmed the accusations, but the concern stated by YouTube highlight fears held by many since Bing On was unveiled.

YouTube argues that as it’s not included in Binge On, video data from the service should not be throttled (or degraded) as mobile users have not given permission as they have for other services like Hulu and HBO. Part of the Binge On agreement is that users may receive lower quality streams in exchange for unlimited access to those sites.

Some industry watchers have said T-Mobile’s Binge On could bypass net neutrality rules, but the carrier claims the scheme adheres to the regulations. T-Mobile says the reason that YouTube has not been included is simply a technical issue. But whatever the cause, T-Mobile’s technology appears not always able to detect YouTube videos and exclude that traffic from the data limits. The operator says it is willing to work with YouTube, so there is a chance the web giant may be included in Binge On in future…

Following publication of this article, T-Mobile provided us with a statement:

This is how Binge On has always worked. We said it from the stage, in press materials, on the web, and in customer notifications last month, and media covered it last month, as well. Binge On has always included video optimization for mobile devices on ALL video, so our customers can watch up to 3x longer. This is in addition to being able to stream from Netflix, HBO, Hulu and other video providers without using any high-speed data.

· The most important thing is that customers are in control. They have always had the ability to turn Binge On off or on at will – either on the web in their My T-Mobile account or on their phones in the My T-Mobile app – and we notified them in advance that it was coming via two rounds of text messages and email, depending on their preferences.