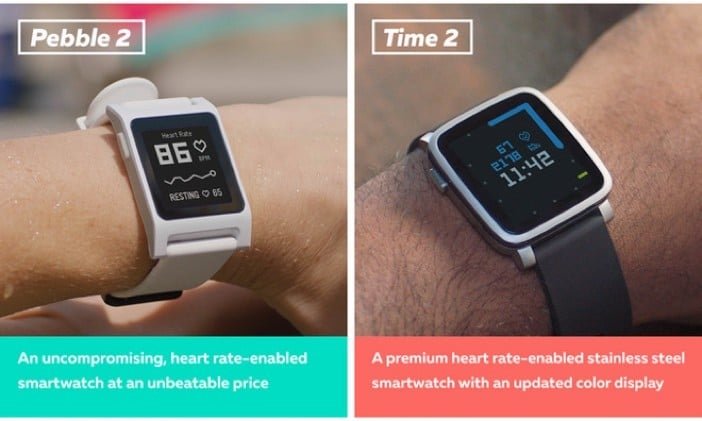 Pebble has just launched two new smartwatches on Kickstarter, the Pebble 2 and the Time 2, besides a new accessory called the Core – which is aimed at people who want to run without a phone, as well as hackers.

Both watches now include heart rate sensors, helping Pebble’s entrance into the fitness market. The Pebble 2 is somewhat thinner than the previous model, comes with a microphone, and has Gorilla Glass for the display cover instead of plastic. Battery life is said to be around seven days.

The Time 2 model will replace the Time and Time Steel, but has a steel body. Pebble also bumped up the display size by more than 50 percent, reducing bezels at the same time. The device has a ten day battery life even with the heart rate tracking enabled.

Both watches support something called Actions, allowing the wearer to press a button and launch shortcuts for installed apps.

The core features 3G, GPS, Bluetooth and Wi-Fi, and runs Android. It does not have a screen however. Via buttons and audio feedback, the gadget lets the wearer track their runs, listen to Spotify playlists and send emergency SMS messages with a location attached. The wearer may also connect a normal pair of headphones via a standard headphone socket.

The Core can pair with Pebble watches and provide Internet access. But for 3G usage, you’ll need to use a SIM card.

Pebble also says the the Core is suitable for hackers, giving an expansion port and software development kits that let them reprogram the two buttons. For example, to call Uber, or fly a drone, Pebble says.

The Pebble 2 is slated for a September release, with the Time 2 due in November. The watches cost $99 and $169 on Kickstarter, but will cost $129 and $199 once they officially launch.