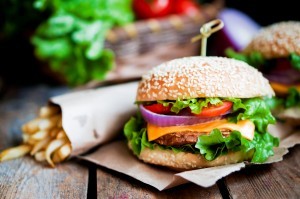 One of the bright spots in the equities market during the Great Recession was McDonald’s (NYSE:MCD). It appears the burger and fry restaurant giant couldn’t sell burgers quickly enough when consumers were depressed by the rough economic times. The company with the Golden Arches was clocking in solid gains for much of the post-2008 era. Well, as the economy in the US improved, it seemed consumers were not (to borrow McDonalds’ slogan) lovin’ it as far as McDonalds’ typical fast food fare is concerned. Given the recent forecasts and targets set by analysts following the House of Ronald McDonald, it appears the burger chain’s troubles won’t be over soon-far from it.
According to Janney Capital Markets, McDonald’s should see a 2.1% drop in same store sales in December. Things don’t improve in January. For the first month of 2015, Janney Capital Markets reports that McDonald’s should experience a 1.7% drop. According to a survey conducted by Janney Capital Markets analyst Mark Kalinowski, McDonald’s franchisees’ prescriptions for turning around McDonald’s recent fortunes include knocking out the bottom 10% performers among menu items as well as taking a second look at McCafe offerings. In fact, according to some of the franchisees in the poll, McDonald’s should let go of the McCafe concept totally. McCafe was originally rolled out by McDonald’s as a response in the shift in fast food consumer tastes towards ‘healthier’ fare. Another cause of headaches of McDonald’s is the ongoing rise of the dollar. The more expensive the dollar becomes, the lower the impact of overseas branches’ sales to McDonald’s bottom line.