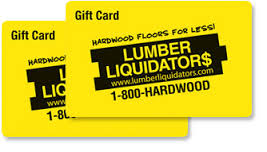 Lumber Liquidators Inc. (NYSE:LL) had a net loss of $7.8 million during the first-quarter, causing the company’s stock to plummet 19%. The company announced that the CFO would step down after the news.

Last year, the company saw a profit of $13.7 million with earnings per share of 49 cents.

Analysts forecasted that the company would have a 15 cent profit per share during the first-quarter, but the company’s EPS was negative 29 cents.

The company blames a “60 Minutes” report for the sharp decline in sales. A story aired last month that showed three Chinese factories labeling Lumber Liquidator products as safe to meet formaldehyde regulations. The show, 60 Minutes, alleges that the company’s products have high levels of formaldehyde and may be potentially unsafe.

Lumber Liquidators states that their products are safe and that “60 Minutes” used false testing measures.

After the show’s airing, company revenue fell 13 percent after being up 19 percent during the first 2 months of the quarter. Sales rose 5.6% during the quarter despite the company losing money.