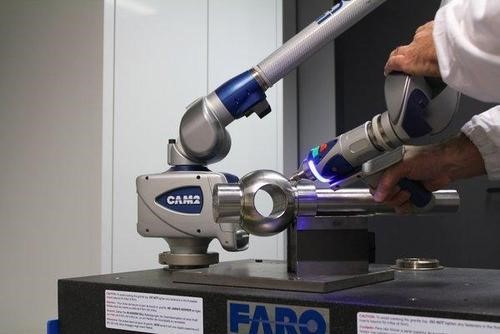 One of the biggest pieces of industrial news in recent years has been the surprising return of American manufacturing after years of low output and outsourcing of work overseas. A report from the Brookings Institute in 2016 noted that manufacturing is actually reaching record levels, with production up 47% over where it was twenty years ago. Much of this growth has been due to increased levels of automation and driven by a groundswell of new technological development.

For today’s manufacturers, staying competitive means staying up-to-date on the latest developments in software and tech. With high overhead and labour costs, margins matter more in manufacturing than in just about any other industry, and the most successful manufacturing firms are usually the ones best able to keep costs down by decreasing waste and improving efficiency. Quality control plays a vital role in determining which manufacturers pull this off, which is why machinery that monitors quality control, such as coordinate measuring machines (CMMs), are such an important investment.

But with technological change occurring at an almost dizzying rate, it isn’t enough to simply rely on standard CMM equipment; for businesses whose production lines rely on CMM technology, staying abreast of news and reviews about CMM equipment is an important way of staying on the cutting edge of change and leading the competition. As software remains one of the most significant areas of development in the metrology world, staying on top of the latest versions of standard CMM programs is critical.

Even in these fast-moving times, last year was a milestone in CMM software, with the release of PolyWorks Inspector, hailed as the premier point cloud inspection solution. In addition to using non-contact point cloud digitizers to identify errors in newly produced parts and automatically determine whether new parts comply with blueprint specifications, Inspector allows CMMs to be more integrated into the production process, monitoring the quality of parts produced and analyzing the data to measure the wear on tools and detect sudden degradations that may indicate problems upstream in the production process.

These capabilities have revolutionary potential, introducing a greater capacity for production lines to monitor themselves and drastically decreasing the chances of sudden bottlenecks caused by machinery breakdowns. These developments are likely to spur further breakthroughs, as CMMs develop even more complex ways of interfacing with other machines on the production line.

By 2020, it is estimated that the United States will be number one in the Global Manufacturing Competitiveness Index (GMCI). While there are a number of factors driving America’s resurgence, the role that automation has played cannot be underestimated. But as North America bounces back after its long decline, manufacturers who want to take advantage of the improving economic climate will need to demonstrate that they are capable of moving with the times. Paying attention to important parts of the production process, like quality control, and staying up-to-date with technological improvements in metrology, is a sure-fire way of guaranteeing your production model is as lean and efficient as possible.