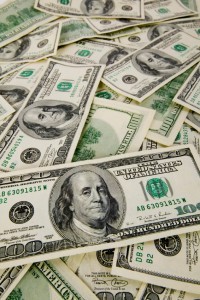 It’s very easy to see why many economists shake their heads when they see the dollar strengthening. It’s obvious that the stronger the dollar gets; the more unattractive American exports become. It simply becomes more expensive and all things being equal, global buyers would rather settle for something cheaper. Well, this simple analysis is the whipping boy excuse for many companies turning in lackluster quarterly earnings reports. Companies ranging from Caterpillar to Microsoft to Proctor and Gamble have blamed the strong dollar for their weak quarterly performance.

Even assuming all that is true, there is one key aspect of the equation that’s not being talked about much. While the strong US dollar does make American products look less attractive, the strong dollar also benefits the US. Why? The US is the largest trade debtor nation. In other words, the US imports more than it exports. This is a trade deficit and there’s a lot of debt involved in that. When the dollar is strong, the price of imports becomes lower and existing debt becomes cheaper.

There are always two sides to a story. Unfortunately, a lot of economists are kind of downplaying this impact. They’re saying that the percentage share of the US trade deficit is really small on a relative basis as a percentage of GDP. Be that as it may, it remains to be seen whether the strong dollar will truly hurt the US economy. It’s also worth noting that 75% of total US economic activity takes place solely within the US geographic borders.