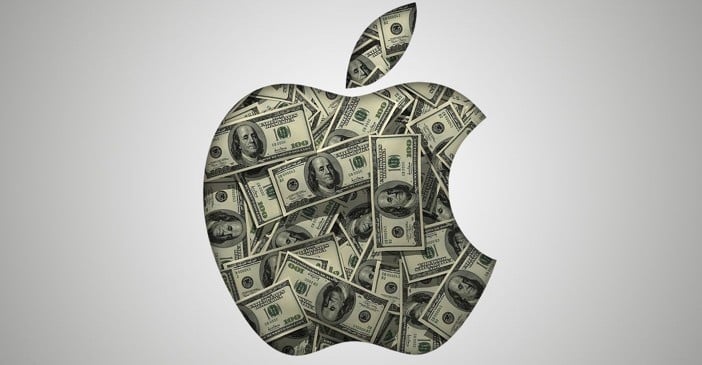 In the last financial quarter, Apple’s iPhone helped the company rake in a massive 89 percent share of smartphone operating profits, which was another record for the holiday shopping season, and an all-time low for Google’s Android.

The most recent breakdown of the profits in the industry, by operating system, were released by Strategy Analytics on Thursday and detailed in a company blog post. Total smartphone operating profits reached $21 billion in Q4 2014, which was up 31 percent year over year, entirely thanks to Apple.

The phenomenal growth was led of course by Apple and it’s record-breaking iPhone 6 and iPhone 6 Plus, which managed to capture most of the industry’s profit just from those two models. Android, on the other hand, came in with a record low at just 11% of global smartphone profit share in the quarter. 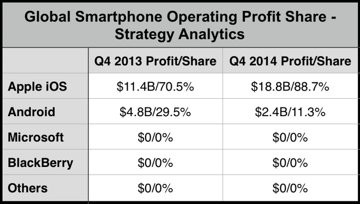 Apple’s share of the smartphone industry’s profits also rose significantly from the fourth quarter in 2013, when iOS and the iPhone had just a 71% share. But Apple’s profits rocketed from $11.4 billion in the Christmas period of 2013, to $18.8 billion a year later. On the other hand, all the devices running Android fell from $4.8 billion to $2.4 billion in the same quarters.

What’s more surprising is that all the other competitors – Microsoft, Blackberry, and ‘others’, didn’t even turn a profit in the 2013 or 2014 holiday quarters.

“Apple’s strategy of premium products and lean logistics is proving hugely profitable,” said Neil Mawston, executive director at Strategy Analytics. “Android’s weak profitability for its hardware partners will worry Google. If major smartphone manufacturers, like Samsung or Huawei, cannot make decent profits from the Android ecosystem, they may be tempted in the future to look at alternative platforms such as Microsoft, Tizen or Firefox.”

It’s long been known that Apple makes the most profits in the mobile industry, but the latest figures show just how wide the profit gulf is between Apple’s iOS and Android.