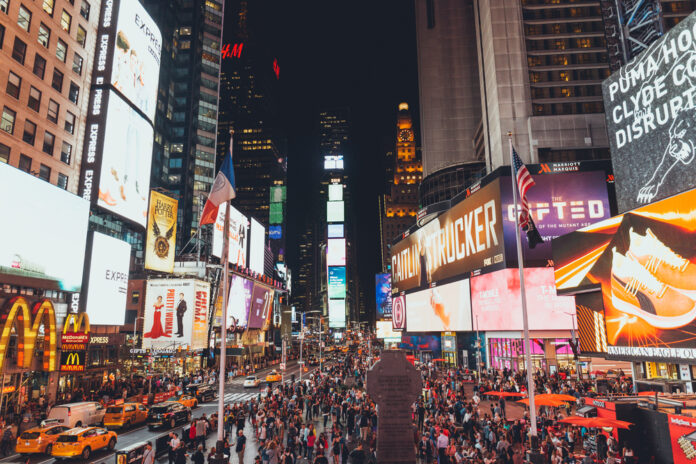 New York City is a billboard advertiser’s dream. Just about everywhere that you look, there will be a giant billboard that catches your attention. We aren’t just talking about the ‘world-famous’ billboards in Times Square either. There are countless billboards scattered throughout any area that seems to get vast traffic from cars or pedestrians.

How much is billboard inventory available in New York City, though? Who owns these billboards? Let’s look.

How Many Billboards in New York City?

It is impossible to know exactly how many New York City Billboards exist at any one time. Due to strict licensing requirements for companies that offer billboard space, some billboards can disappear almost overnight if a company realizes it isn’t generating any cash from advertisers.

It is estimated that around 2,200 billboards are operating in New York City. On top of this, you have around 260 digital billboards. This is the main billboard inventory. There may be smaller billboard slots available throughout the city too. As we said, numbers can go up and down when billboard owners opt to renew their OOH licenses.

Who Owns the Billboards in New York City?

This is another question that can be quite difficult to answer. Many of the companies that own billboard inventory in the city may own just one or two billboards. For example, some of the billboards in Times Square are owned by the company that owns the building that the billboard is attached to.

It is estimated that at least 40 billboard-owning companies are operating within the city. These are both small and large companies.

Perhaps the only time that it is known exactly who owns a particular billboard is in Times Square. This is because Times Square maintains a list. Some billboard owners there can include the following.

Branded Cities are also a prominent billboard inventory holder in the city. Their most famous slot is the NASDAQ ticker. They also have the Thompson Reuters sign.

Clear Channel is one of the largest advertising agencies in the world. They own many billboards throughout New York City and a few of the ones you see throughout Times Square.

Neutron Media owns a single digital billboard in Times Square. This is the one found at 1500 Broadway; West 43rd Street.

This company owns perhaps one of the most famous billboard locations in Times Square. In fact, in New York City as a whole. They have the honor of holding the billboard at One Times Square. This is the same billboard that you will have seen countless times when the ball drops on New Year’s Eve.

Other prominent billboard owners in the city include OUTFRONT Media, Sherwood Outdoor, and Silver cast Media, to name but a few.

You will never have to worry about who owns billboards in New York City. Many of the billboard owners will not deal with you directly. Instead, if you wish to start advertising on billboards in the city, you will need to go through outdoor advertising agencies who will help manage your advertising campaign for you.

What Does Market Price Mean? What Does It Mean For Your Investment?