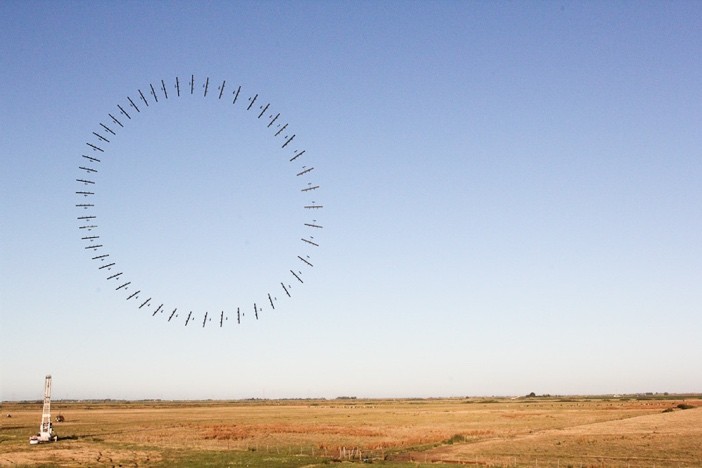 Google has said it plans to launch 84 foot-long airborne wind turbines, according Astro Teller, the head of Google X, the company’s lab of so-called ‘moonshot’ projects.

The gigantic kite-like turbines will be launched next month, Teller said at a keynote in the Interactive portion of South by Southwest (SXSW).

Google has been working on Project Makani, as the turbines are called, but the company has previously been testing smaller 28-feel long models. The new ones next month will be full scale models.

According to Google, flying turbines are advantageous because wind speed is faster and more consistent at higher altitudes, but it’s also not practical to build taller ground-based turbine due to their weight (hundreds of tons), said Teller, which is why Google is focusing on the airborne type instead.

“There’s an enormous benefit to going up higher”, said Teller, speaking at the Austin Convention Center.

Each kit in Project Makani looks like an airplane’s wingspan without the middle cabin, with eight propellers to take off, and a tether to attach to the ground. Once the kit reaches the limit of the tether, more than 1,400 feet the propellers stop climbing, and at that point they serve as flying wind turbines and the kit performs large circles in the sky.

This generates 600 Kilowatts of energy that is sent down to earth using the tether. “If this works as designed it would meaningfully speed up the global move to renewable energy” said Teller.

Google has already flown the 28-foot models in Pescadero, California, one of the gustiest places in the world. There wind speed and direction can change in seconds. But despite the conditions, Teller said Google has not crashed a Makani kite after more than 100 hours of flying, though that may not be a good thing.

CEO Larry Page said to Teller that wanted at least five kites to crash, but none did, so they go into the full scale model testing without that knowledge.

“We’re all kind of conflicted about that”, Teller said. “We didn’t want to see it crash, but we also feel like we failed some how. There’s magic in everyone believing that we might have failed because we didn’t fail”.