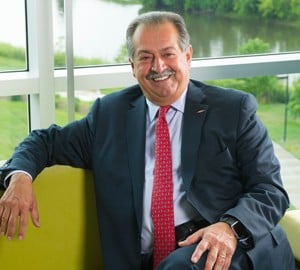 Dow Chemical  (NYSE:DOW) CEO Andrew Liveris has announced that he will leave the company by the middle of 2017, after the merger between Dow and DuPont Co (NYSE:DD) is complete.

Liveris has stood at the helm of the chemical manufacturer for the last decade, and led the deal to merge the two chemical and agricultural giants into a $120 billion company.

While Mr. Liveris has several times hinted that the merger would be the culmination of his career at Dow, he confirmed it on Tuesday after the company delivered better than expected earnings. He did not hint at what he may do next but made it clear he would not be involved with any of the three companies which the Dow-DuPont merger will split into 18-24 months after the deal is complete.

There was no comment or speculation about who would take over in place of Mr. Liveris.

Stock in Dow Chemical continued to trade up 3% after the announcement on better than expected earnings, despite a decline in revenue caused by weak international demand and a strengthening dollar.

The merger would see the two companies form one of the largest firms in the world, which will generate over $90 billion in sales.