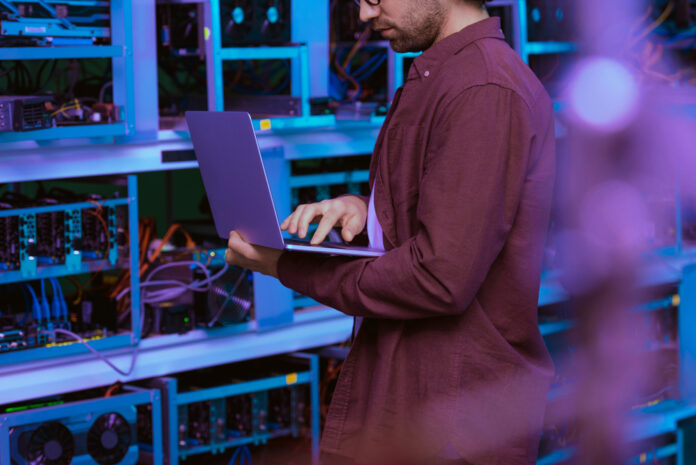 With the massive boom of cryptocurrencies, mining them has begun entering the mainstream somewhat, and many people want to get in on it themselves, or they’re just curious about what it is and how it works. While the behind-the-scenes mining processes can be highly complex, the basic knowledge you need to understand how it functions and how you can do it yourself isn’t that demanding. This guide is meant to be a simple introduction to the world of crypto mining so you can better understand how and why it’s done. If you’re interested in any other crypto-related topics, we highly suggest checking out cryptonews.

Types of mining based on hardware

Depending on the equipment you’re using to mine, you can split mining into the following types:

Each of them has its ups and downs, which you need to consider when choosing which option is best for you.

ASIC mining rigs are distinct from other types of mining equipment as they can only mine coins that work on a specific algorithm. This means that you are limiting yourself to only mine certain coins when you purchase an ASIC rig. They also consume quite a lot of power, making them not ideal for at-home mining. However, they do provide you with very high computational power in exchange for all of these downsides, which can be worth it, and industrial level ASIC farms do exist, showing that they have a place in the crypto mining world.

CPU mining was the norm during the early days of bitcoin and cryptocurrencies. Still, it has fallen out of favor compared to GPU and even ASIC mining as it is usually less profitable due to lower computational power regarding electricity usage. However, it still does have a place as it is a decent starting point for new miners, and it also has a relatively low entry cost compared to other mining types. The main benefit of CPU mining would most likely be that you can enter the world of crypto at a far lower price, making it a cost-effective way to learn.

The king of mining – GPUs

Today, the most common option you will see used is mining done with GPU rigs. These are usually devices with a minimal ram, a basic processor, and multiple (typically high-end) GPUs. GPUs provide excellent computational power for the electricity they require. They also produce far less heat and noise than ASIC rigs, making them an option for residential mining due to cooling, noise reduction, and power being far easier to resolve. However, it is also important to note that some coins such as Ethereum cannot be mined currently with GPUs with 4 or fewer GB of VRAM. Hence, if you intend to mine certain cryptocurrencies with GPUs, make sure to do your research not to buy ones that you will not be able to use for your intended project.

Types of mining based on methods

The hardware you use isn’t the only thing used to categorize mining types, as the method is also a massive distinction that will dictate the speed and profit of your endeavors. The main forms of mining are:

The main benefit of renting someone to mine for you is that you don’t pay for power costs which are good in areas where the electricity prices are far too high to make mining with your own rig profitable. The main issue is how many cloud contracts are set up; it may not be as stable of an investment as using your rig. We highly recommend reading through the agreements to make sure everything is fair and that you agree before accepting it. Despite the drawbacks, cloud mining certainly has its place in areas where using your rig isn’t a possibility for whatever reason.

Should I ride solo?

Solo mining can sound very appealing considering that you don’t need to share any potential spoils with other people since all the rewards from the block will go to you should you be able to solve it. That’s the catch, though; you get the reward *if* you solve it. This means you need a lot of computational power and luck. So it can be seen as high risk but high reward, and if you have the rig (or rigs) for it, you may want to explore the option since the potential profits can be very high. Remember that you are sacrificing consistency for the chance of much higher yields, so it may take a while to pay off.

I’ll swim in the pool in that case

Pool mining is the most popular option as you solve a block with multiple people. This means that the chance of it being solved at any moment is exponentially higher than with solo mining. In addition, the rewards will be divided equally among all participants based on the power used. This means if five people with equal power solving a block, each would get a fifth of the total reward. While it may seem like you get tiny compared to solo mining, the consistency is infinitely higher, resulting in a more stable profit overall.

We hope that this guide has helped you understand the ups and downs of every crypto-mining option and perhaps helped you better choose how you’ll go about diving into the mining world.