Twitter has just reported a net loss of $125m in the fourth-quarter 2014, beating most analysts’ expectations.

Twitter also said that revenue grew faster than expected, increasing by 95% to $479m during Q4 lat year. There are now 288 million monthly active users, which is an increase of 20% from the year earlier. However, not everything was rosy, as growth from last quarter slowed: the popular social media site added only four million users over the past three months.

Twitter explained the slowing growth, saying it that it lost four million users as a result of integrating various third-party applications. Twitter chief executive Dick Costolo tried to allay fears about user growth, saying in a statement: “The trend thus far in [the first quarter] leads us to believe that the absolute number of net users added in [the first quarter] will be similar to what we saw during the first three quarters of 2014.”

Earlier this week, a memo to staff was leaked in which Mr Costolo warned that bullying on Twitter was turning away users from the service. But for investors, user growth in the U.S. has almost ground to a halt – the company said it had 63 million monthly active users in the U.S. advertising market, which was exactly the same as the previous quarter. However, the slowing user figures do not appeared to have put off advertisers. 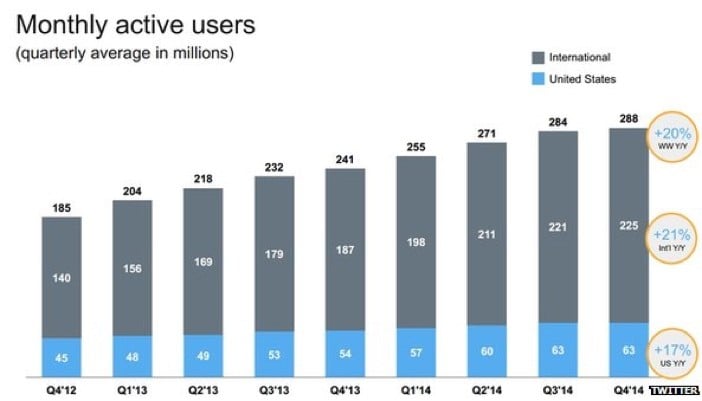 Twitter said advertising revenue increased to $432m in the fourth-quarter, an increase of 97% from the year before. On the earnings call, Mr Costolo also stated that Twitter and Google had struck a deal, but few details were provided. “I do want to confirm that we have a relationship that we have agreed to with Google” he said, but did not provide specific details. Bloomberg and the New York Times had reported earlier that Twitter struck a deal with the search giant to make Twitter’s messages more visible in search results. Shares in Twitter rose over 9% in after-hours trading yesterday.

Twitter’s outlook for the first quarter of 2015 is as follows: