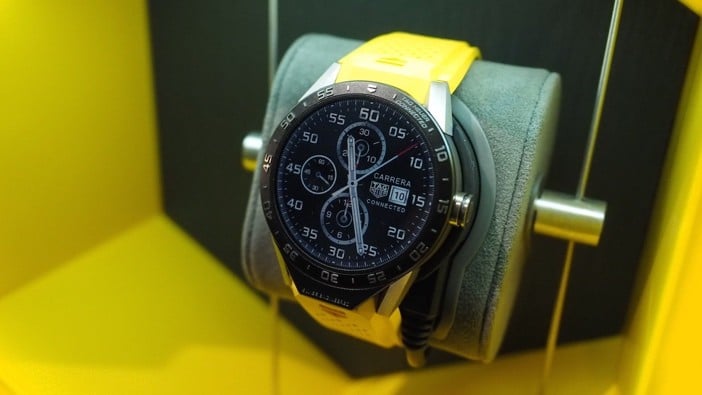 This week, Tag Heuer became the first Swiss watch company to offer a smartwatch that fuses traditional Swiss design with hi technology, aiming to capitalise on the growing wearable market at a time when traditional watches are suffering declining sales.

The watch, called the Tag Heuer Connected, was developed with Google and Intel, and reportedly costs upwards of $1,500. There will initially be just a thousand units available in fifteen stores in the US, with the UK, Germany and Japan to follow shortly after the launch.

The watch itself has a titanium case, black rubber strap and a digital face onscreen, and is designed largely to look like a classic mechanical watch. The Connected uses an Intel Atom CPU, and allows the wearer to use the Internet, stream music and run apps based on Android Wear, such as Google Maps and Google Fit.

The watch requires a connected phone to work, but responds to voice commands and has, like all smartwatches, a touchscreen. Tag Heuer’s new watch is pitted against the Apple Watch, which brought wearables into the mainstream. The company’s chief executive Jean-Claude Biver, said the Connected watch is a way to attract customers and warm them to traditional watches.

“The Apple Watch will never be eternal”, Biver said at an event in New York. “Our watch will. It’s a big advantage”.

Uniquely, customers will be able to exchange the Connected watch for a mechanical after two years if they pay another $1,500, a move that Biver said allows Tag to protect its traditions and also satisfy younger people who may be tempted by Apple.

When Biver was quizzed about sales of the new watch, he said “I don’t really know … I only have the gut feeling that we’re just at the beginning, and that the first (connected) watches are like the first phones we had twenty years ago”.

The Swiss watch industry has suffered the largest drop in sales since 2009 in the third quarter of this year, with a 14.5% reduction in the important 200-500 franc category, which has led some to speculate that the Apple Watch is taking that market share.

Tag has teamed up with technology giants for its first foray into wearables. “If you want to offer a smartwatch as sophisticated and complete as the Apple Watch, that is practically impossible for a Swiss company alone”, Biver said. “We cannot develop microprocessors to that level”.