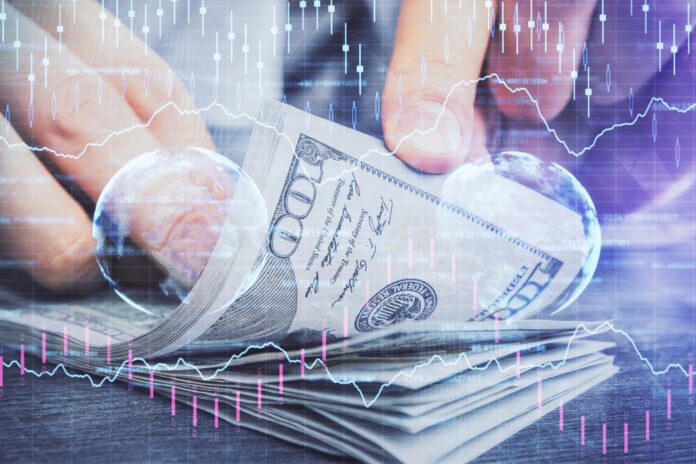 The specter of inflation has haunted markets and the real economy for much of the year. In a Gallup poll, 26% of Americans cited an economic concern, such as inflation, as their top concern. Moreover, inflation (7%) was the second most frequently mentioned specific economic concern, after the economy in general terms (10%). So the question for most Americans is, “Should we be afraid of inflation?”

Consumer Price Inflation is Just Half the Picture

As the chart below shows, inflation for consumer goods has jumped over the last 12 months ending October 31: 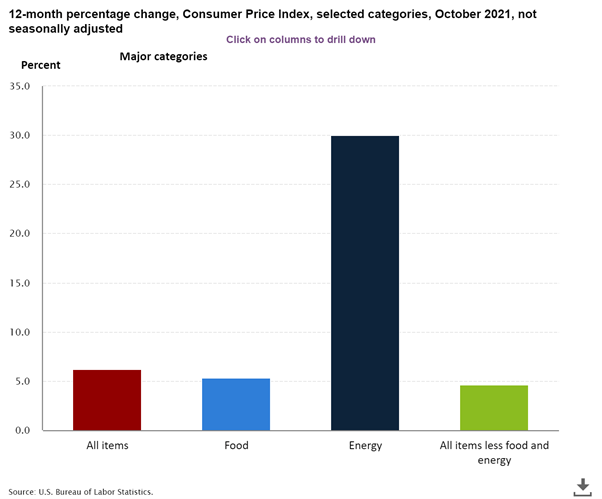 When the Bureau of Labor Statistics calculates inflation, it does so based on price changes from a basket of consumer goods. So, changes in inflation are changes in the Consumer Price Index (CPI). For the year ended October 2021, inflation was calculated as 6.2%. The trouble with this figure is that it does not take into account asset price inflation. So stuff like stocks, real estate, gold, and other capital goods. The biggest purchase that the average American makes is their home. Still, house price inflation doesn’t count towards inflation because asset prices are not factored into the definition and calculation of inflation. But in terms of your overall expenses is factored in, and house price inflation has been soaring over the last decade and increased sharply following the pandemic, as the S&P/Case-Shiller U.S. National Home Price Index shows:

In the last 12 months, the index has risen by 18.6%, the most significant increase in the index’s history. Housing prices have jumped during the pandemic due to increasing demand, building costs, and other long-term supply constraints. A White House report on house price inflation found similar conclusions from third-party data: 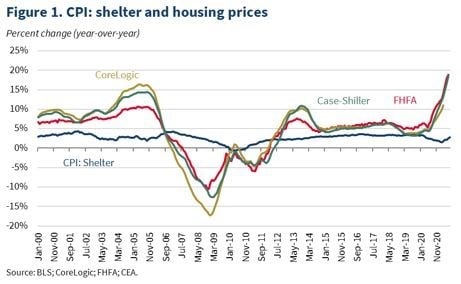 Although economists initially believed that inflation would be a short-run affair, many have begun to worry that the inflation we have witnessed due to the global supply chain disruption will be prolonged. New York University economics professor Nouriel Roubini has warned that the risk of stagflation is grossly underestimated. Roubini suggests that the 1970s style adverse supply shocks we are experiencing are only one driver of inflation. He points to more long-term supply shocks, such as emerging protectionism, de-globalization, the Sino-American cold war and ensuring segmentation of global supply chains, and the re-shoring of foreign direct investment from low-cost regions like China to higher-cost areas such as the United States. In addition, emerging economies such as China are aging, with some economists doubting China’s future growth prospects. Some economists have worried that the Biden Administration’s spending, such as the $1 trillion infrastructure bill, will tip the economy into a period of persistent inflation by putting too much money into the economy.

Investment management firm, Bridgewater Associates, believes that supply is not the problem. According to their analysis, supply for most goods is at an all-time high, and the real problem is a monetary policy that has driven demand to excessive heights that supply cannot support.

Nevertheless, the idea that inflation will be deep and persistent is still a minority position. 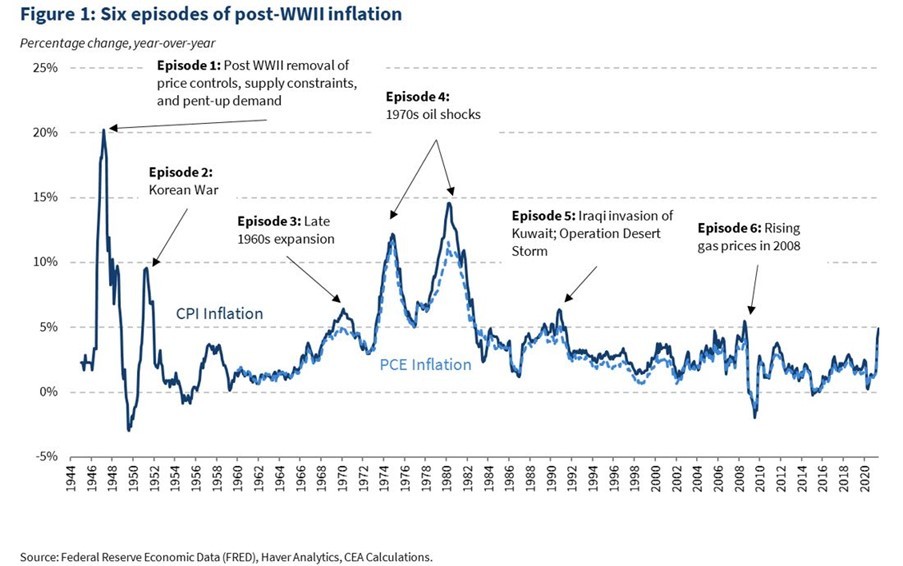 They argue that the period immediately after WWII is the most relevant parallel to the present period. According to Milton Friedman and Anna Schwartz, WWII left in its wake a period of inflation much like that during the Civil War and WWI. Prices surged after WWII ended, using two inflation measures and, by 1947, inflation had gone up 20%. The Bureau of Labor Statistics believes that this period of inflation was due to the end of price controls, supply shortages, and pent-up demand. These are precisely the conditions that the White House believes exist today. 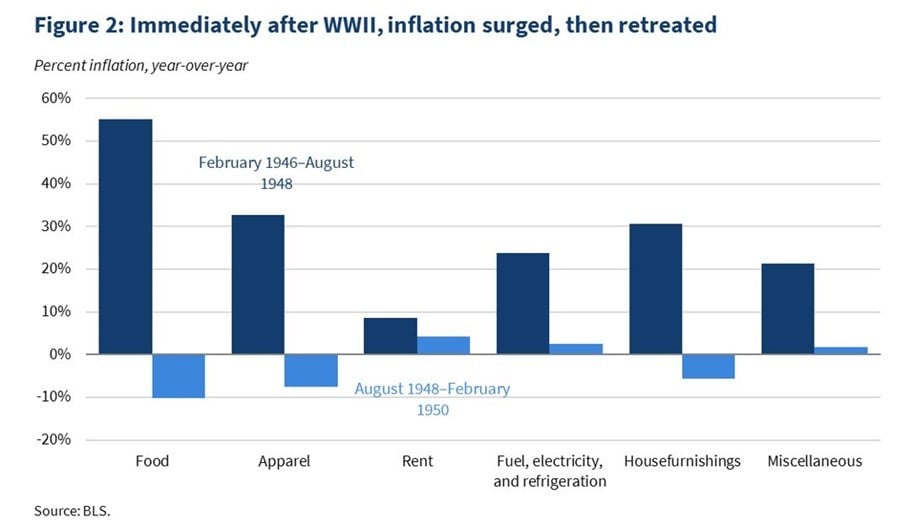 Although price controls were not implemented in response to the pandemic, the White House saw the period as best fitting our present situation. But, crucially, inflation, even under those conditions, was not long-lived.

The White House conclusion is pretty mainstream. Paul Krugman, the doyen of mainstream economists, has also argued that historical parallels suggest that inflation will not be persistent. Like the White House, Krugman and many economists do not think that the present period is like the 1970s, a position Roubini and the minority share. Instead, Krugman believes that the more considerable risk is in not seeing this inflationary period for what it is: a transitory period in American history.

The consensus seems to be that inflation will be transitory. In other words, it’s not time to get worried just yet. The 1970s remain a unique period in American life. It’s easy to overreact to extreme events and to imagine that they will be persistent. At present, the more rational thing to do would be to remain vigilant but to keep in mind that in the normal course of events, heightened inflation tends to be transitory.