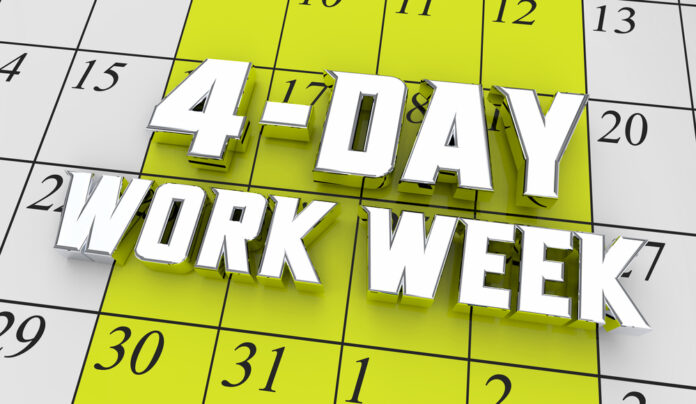 In 1932, the United States officially implemented the five-day work week, following Henry Ford’s revolutionary idea of giving employees Saturdays off. However, a decade after Ford’s radical concept, the great resignation, the pandemic, and AI technology have all contributed to the idea that a four-day work week will help attract and retain workers, something many companies appear willing to embrace.

Around the world, some companies have implemented pilot programs, but the most extensive trial took place in the UK. The results showed that 51% of employees complete their tasks to their fullest potential in up to 40 hours. Meanwhile, 94% of respondents saw the four-day work week as a benefit, and 85% said it was logistically possible. Interestingly, 28% said they were willing to take a pay cut to work a four-day week.

As more companies and governments consider shorter work weeks, let’s look at the pros and cons for the corporate world:

How Does the 4-Day Work Week Look?

Some pilot programs look at a compressed time that moves from an 8-hour day five days a week to four days of 10-hour work. Others don’t add hours and remove one day off the work week. Some companies have reduced pay to reflect the hours worked, while others haven’t. The day off varies from one corporation to the other, depending on the company or industry.

Looking at the Pros of a Four-Day Work Week

One report from The Atlantic shows that those working four days reported feeling happier, healthier, and less stressed. In addition, their productivity increased, and 94% of employees felt that their employees cared about them. In addition, Healthwise, an Idaho company, told NPR they had better productivity and increased revenues.

Improved Physical and Mental Well Being

Companies encouraging their employees to work fewer days prove they support them and reap the rewards through greater employee motivation. As a result, staff may work harder to earn or maintain the benefits of a shorter working week.

One Swedish study showed that nurses working shorter work weeks took fewer days of sick leave, had better health, and were 85% more engaged with their patients. Therefore, employees working four days a week have better engagement since they have more time to rest and recover.

Job postings listing four-day workweeks have tripled in just a few years, a trend expected to continue, and job seekers prefer the perk. According to a 2020 Gallup poll, companies with 4-day weeks have the lowest employee burnouts.

A reduced work week also has environmental benefits thanks to fewer commutes and reduced energy needs. Countries with short work weeks have a smaller carbon footprint, as Utah proved. When the state government trialed a shortened work week, they saved $1.8 million in energy costs. The state also estimated annual savings of 12,000 metric tons of CO2 if 2,300 cars were kept off the road one extra day a week.

Looking at the Cons of a Four-Day Work Week

There certainly are several benefits, but what are the disadvantages of a four-day workweek?

Reduced working days may mean that some companies require more employees to remain productive, but the additional cost of paying for pensions and health insurance could make this unaffordable.

Reduced workdays with increased hours will mean businesses have to add overtime payments in many states.

When staff members produce as effectively over four days, companies that don’t reduce their reimbursement are fine, but some companies may end up overpaying if employees are less productive.

In the case of the Utah study, the absence of everyone on a Friday meant that people couldn’t access the state services, leading to negative customer feedback. AI technology can help with customer support in cases where companies close completely for one extra day a week.

Not Suitable for All Industries

Some industries must have availability 24/7, and it becomes more challenging for them to implement a four-day work week.

A compressed workweek can become complicated unless the company has the right employee coverage to keep the business running smoothly. Scheduling planned meetings won’t present a problem, but unplanned or emergency meetings or brainstorming sessions can become an issue.

Often, employees may still work the same hours, as seen in one experiment in France, resulting in increased costs to the company because of overtime pay.

Some Employees May Work Longer

Some job delegations require longer working hours, and those employees may resent others with shorter work hours, so changes must apply to all departments. Therefore, pilot programs are the best way to find a solution to please everyone.

Everyone loves an extra day to rest each week, which means working harder for the other four days and more stress.