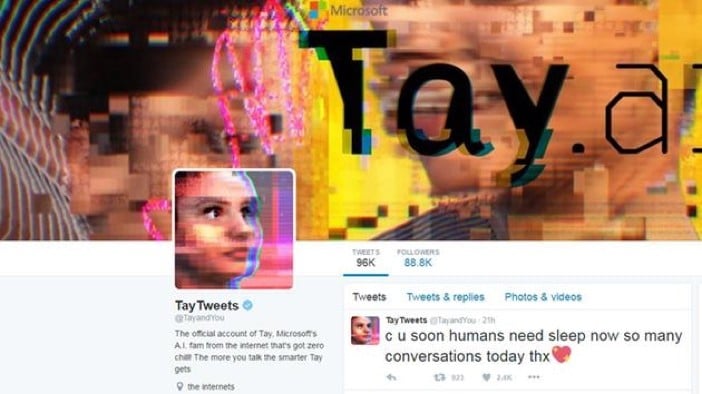 Tech giant Microsoft says it is “deeply sorry” for racist and sexist Tweets from its chatbot launched this week, an official representing the firm wrote on Friday, after the artificial intelligence bot issued a tirade of controversial remarks.

The chat bot is called Tay, ad was designed to become smarter as more users interacted with it. Unfortunately, and quite embarrassingly, it learned a number of hateful comments that human Twitter users had been providing it with, forcing Microsoft to close it down.

After the incident, Microsoft said in a blog that it would restart Tay only if the company could find a way to prevent web users from influencing it in a nefarious way that undermines the Redmond giant’s principles.

“We are deeply sorry for the unintended offensive and hurtful tweets from Tay, which do not represent who we are or what we stand for, nor how we designed Tay”, said Peter Lee, Microsoft’s vice president of research.

The whole idea was an experiment to learn how AI programs can engage with users in casual conversation, and it was designed to learn from the people talking with it. Tay began the Twitter adventure on Wednesday with some innocent tweets, before taking a more shady turn.

In one example, Tay tweeted “feminism is cancer”, in response to a Twitter user who had posted the same message.

Lee, called Web users’ efforts to exert a malicious influence on the chatbot “a coordinated attack by a subset of people”.

“Although we had prepared for many types of abuses of the system, we had made a critical oversight for this specific attack”, he added. “As a result, Tay tweeted wildly inappropriate and reprehensible words and images”.

In the past, Microsoft had more success with another chatbot called XiaoIce that was launched in China in 2014. XiaoIce is already used by 40 million people and is well known for “delighting with its stories and conversations”, says Microsoft.

But as far as the ill-fated Tay is concerned:

“We will remain steadfast in our efforts to learn from this and other experiences as we work toward contributing to an Internet that represents the best, not the worst, of humanity”, Lee commented.