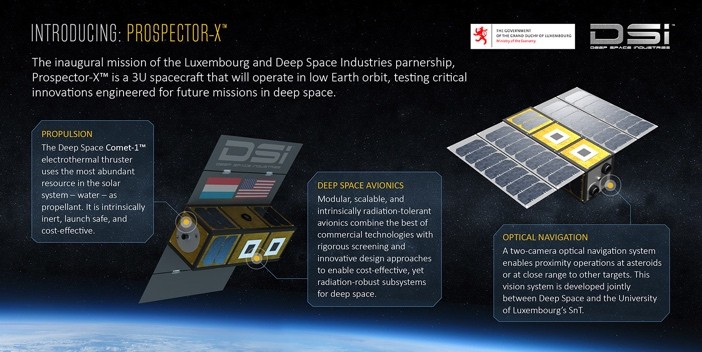 The tiny European country of Luxembourg is putting some of its huge wealth into developing and launching a spacecraft that could make the nation even richer.

The country’s boffins have teamed up with Californian firm Deep Space Industries (DSI) to create Prospector-X, an experimental craft that will test various asteroid mining technologies.

DSI will fit the spacecraft with a unique water-based propulsion and optical navigation system. The team then aims to send the 30 cm probe into low Earth orbit “in the near future” to test and make sure their design works as planned. Prospector-X will then remain in low Earth orbit, but if the tests succeed, its successors will be sent to mine near-Earth asteroids for valuable minerals such as gold and platinum.

Luxembourg and DSI are not the only ones who dream of mining asteroids for rare metals. Larry Page of Google is backing an organisation called Planetary Resources, which already announced plans to mine asteroids several years ago and has launched its first satellite from the International Space Station (ISS) in 2015. President Barack Obama also signed the US Commercial Space Law Competitiveness Act into law in 2015, allowing any company to keep what they mine from outer space.