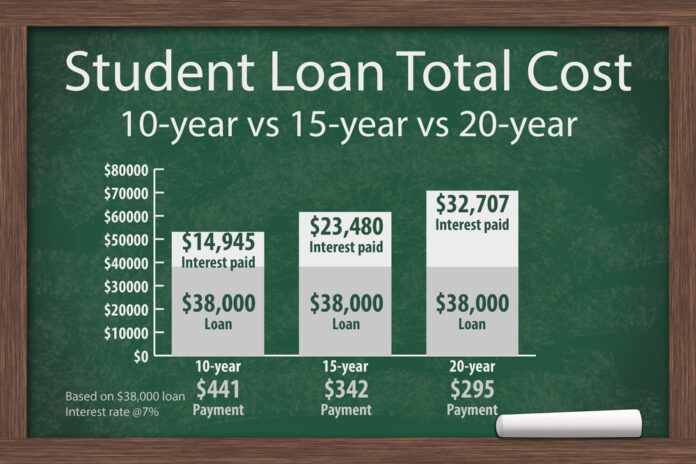 Student debt is a feature of an American college education. At present, around 70% of college graduates finish their education with some level of student debt. Approximately 44 million Americans hold a total of $1.4 trillion in student debt. Those who take out a federal student loan through a standard repayment plan are expected to repay them within 10 years. However, for many people, a decade is an unrealistic period within which to repay their student debts. An alternative to the standard repayment plan is the income-driven repayment plan, through which a qualified borrower can make smaller payments across 20 years. According to the Education Data Initiative, repayment timelines for student debt are as follows:

Americans Are Struggling with Repayments

Despite guidelines on repayment terms, most people go way beyond those terms. In 2019, New York Life polled 2,200 adults and asked them about their financial mistakes. The average participant took 18.5 years to repay their student loan, typically starting from 26 and making their final payment at age 45. This conclusion is backed by a study by the Education Data Initiative, which estimates a repayment period of around 20 years. When OneWisconsin Institute polled Wisconsin university graduates on their student debt, they found that the typical bachelor’s degree graduate took 19.7 years to repay their debt and 23 years if they had a graduate degree.  A survey by Citizens Bank found that 60% of people expect to repay their student debt by their 40s.

The Education Data Initiative estimates the following repayment periods for undergraduates graduating in 2021:

The class of 2021 is graduating at a time when student debt interest rates are at a historic low of 2.75% for Direct Subsidized and Unsubsidized federal student loans to undergraduate borrowers. There is some talk of raising overall interest rates that may increase borrowing costs for student loans, but at present, the costs of borrowing are very low.

Those who feel that they cannot repay their student debt over the stipulated timeline can apply to programs such as the Extended Repayment Plan, which allows borrowers to repay the debt over a 25-year period and choose either a fixed or graduated repayment plan.

Complicating matters has been the weakness in salaries over the last few years. As various reports have shown in the last few months, many students graduate with degrees that cannot earn them the career earnings necessary to repay that debt. The most extreme case of this was given by the Wall Street Journal, which pointed out that film school graduates from Columbia University who got federal student loans had a median debt of $181,000. Still, two years after graduating, half of those borrowers had salaries of less than $30,000 a year. Typically, borrowers are advised to spend just 10% of their earnings on repayments, with 36% being the maximum amount. Using those guidelines would take a Columbia University film graduate between 16.75 and 60 years to repay their student debt!

Before taking out student loans, it’s important to consider the average salary in your field and weigh that up against your likely costs of living to see if you can repay those debts. If the mean salary in your field, coupled with your expected cost of living, result in an estimated repayment period that stretches across decades, then you should rethink your options.

A Guide To Self Build Construction Loans