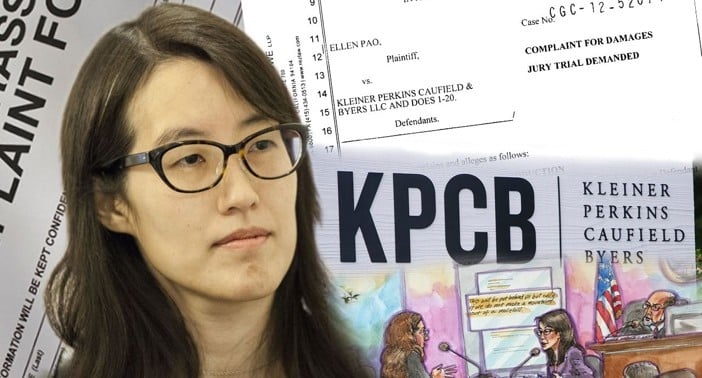 Kleiner Perkins was victorious today after a month-long trial in which the jury finally found against Ellen Pao, in all of her claims of gender discrimination.

In a case that has certainly captivated audiences beyond the tech industry, Pao filed in 2012 against the Silicon Valley firm, where she had been a junior partner. She could have won as much as $160 million if the jury had found in her favour. But in the San Francisco courtroom, she outlined stories of sexual harassment and all-male company skiing trips at the firm.

Ellen Pao also raised other issues – such as double standards in how aggressive women can be and how their success in investments often translates into promotions.

Kleiner Perkins retaliated with a successful attack on her performance and personality, saying that she was not right for the firm. Pao’s case has helped raise a broader conversation about gender imbalance outside the courtroom, but in court, she lots on every single count.

When the verdict was announced, there were even gasps from the courtroom as each “no” came out. After hearing all the decisions, the judge then asked each juror to speak their vote so he could count it once more.

After the count, Judge Kahn realise that the vote was eight to four, whereas the jury needed it to be nine to three for a verdict. He said the verdict could not be accepted and sent the jury back.

Kleiner Perkins knew by this point that they has almost won. As the onlookers left the courtroom, members of the KP team and supported hugged and congratulated each other. Later, when the jury reached the subsequent verdict, the juror who changed his mind on the last claim changed it back again.

Was Pao retaliated against? “No,” the court clerk read.

“I want to thank my family and friends and everyone, male and female, who has reached out to tell me their stories,” said Pao. “I have told my story and thousands of people have heard it. My story is their story.”

She continued: “If I’ve helped to level the playing field for women and minorities in venture capital, then the battle was worth it.”

“Now it’s time for me to get back to my career”, she said.