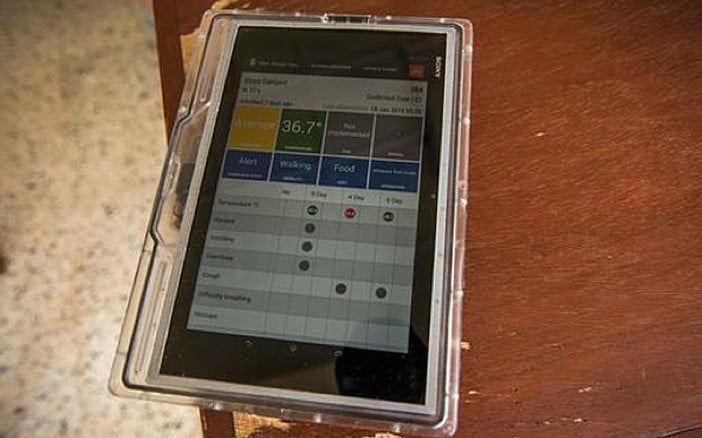 The Android device is based on a waterproof Sony Xperia with an additional protective case, enabling medics to record and share vital patient information such as temperatures and symptoms over time.

The manufacturers claim it can also withstand storms and the high humidity that are common in the Ebola regions of West Africa.

Furthermore, its sharp edges have been removed, to avoid piercing protective clothes worn by health workers, and it can be charged quickly (and wirelessly) simply by being placed on a table.

The tablet was designed after a doctor in the the Médecins Sans Frontières‘ (MSF) treatment centre informed a colleague in the UK that he had to shout patient details over a fence from inside the protective zone – where medics need to be fully covered to avoid the disease (even passing simple things like a piece of paper to the outside world could transmit the deadly virus).

He was shouting through a mask at the end of his ward round to someone on the other side of the fence who was writing the notes down and then entering them in a patient record,” said Ivan Gayton, MSF’s technology adviser.

“It was error prone, exhausting and it wasted five or 10 minutes of the hour medics can spend fully dressed inside the protective zone before they collapse from heat exhaustion.”

Mr Gayton reached out to contact that work in technology including one in Google’s Crisis Response Team. The company then assigned five engineers to come up with a design, and eight devices have been distributed to medics at the MSF centre in Sierra Leone.

Cases of Ebola are now falling, but Mr Gayton said the information on the devices should help to map symptoms, and the technology could also be deployed for other disease outbreaks.

“Hiccups are a very distinctive sign of Ebola but we haven’t known whether they were a good or bad sign,” he said. “Collecting more information increases our understanding of the disease which should increase our capacity to fight it.”