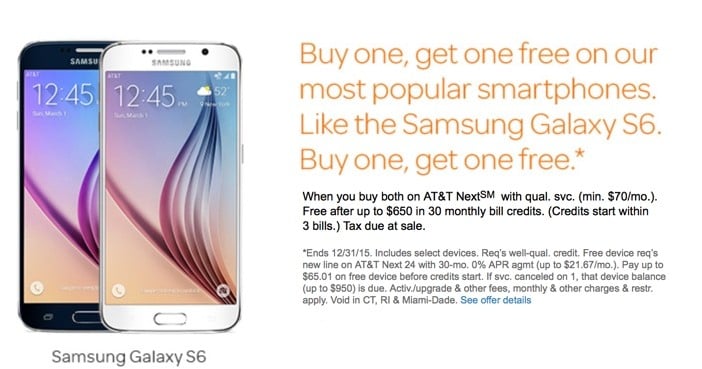 AT&T has just announced its Buy one get one free promotion for flagship smartphones, including the Samsung Galaxy S6 and the iPhone 6s. The deal comes as retail giant Wal-Mart has also become the latest company to sell the Apple Watch.

The AT&T promotion site says that Samsung devices (such as the Galaxy S6) are eligible for the special promotion. However, upon checking a local AT&T it has also been confirmed that the promotion also applies to the iPhone 6s.

In the case of the iPhone 6s, customers must first by a new iPhone on the AT&T Next finance program. Anyone doing so will then receive $650 of free credit (which is how much a new 16 GB iPhone 6s costs), spread over the life of the finance instalments. Customers are however responsible for taxes and the service fees.

Customers are allowed to apply the credit to a greater-capacity iPhone 6s (or iPhone 6s Plus) is they wish, however they must pay the cost difference.

Also this week, Wal-Mart started to sell the Apple Watch via its online stores, though only the Sport edition (as well as accessories). Wal-Mart now joins Best Buy and Target as the most recent large retailer to stock the smartwatch.

Unfortunately, unlike Target and Best Buy, there are no discounts on the Apple Watch through Wal-Mart. Best Buy has currently slashed the price by $100 for all models of the watch. Target offered a special $100 gift card with the watch when purchased on Black Friday.