The Effect of Years of Corruption and Medicare Risk Adjustment Fraud on the U.S.’s HealthCare system and taxpayers

Keith Fernandez is a Harvard graduate and an eminent entrepreneur with a prolific background in Corporate Finance- having worked in numerous world-leading banks such as Bank of America and KKR.

Aside from his widely recognised achievement in the world of finance, Fernandez owns a plethora of corporations- including National Diagnostic Solutions (NDS), and has recently been the recipient of prolific media attention as a result of his ‘whistleblower’ lawsuit against Anthem Subsidiaries (Freedom Health & Optimum Health), and Physician Partners LLC for Medicare Risk Adjustment Fraud.

These ultrasound screenings- which were carried out at a flat rate of $ 70 USD per screening, allegedly brought in no revenue for PPL, however this unsurprisingly turned out not to be the case. Allegedly, Fernandez quickly discovered quite the opposite. PPL was, in fact, ‘routinely’ breaking federal law by engaging in Medicare Risk Adjustment Fraud and maliciously misleading their patients so as to believe they needed to pay for expensive radiology exams when, in fact, there was no diagnosable medically-justifiable reason that warranted such a suggestion.

According to Fernandez, PPL- whose ownership overlaps with Anthem’s aforementioned Subsidiaries, organised a prolific network of corruption which involved specifically directing the organisations patients to a ‘PPL call center’- rather than their doctor’s office, and manipulating them by insinuating that such tests were necessary for their own medical safety. In fact, such tests were not signed by the patient’s personal physicians or cardiologists, and their signatures were allegedly ‘forged’.

The Risks of ‘Phony’ Ultrasound Screenings

As Public Citizen- a consumer advocacy group with over 300,000 members, represented in their letter of complaint to Scottsdale Healthcare, unnecessarily prescribing such ‘heavy’ radiological examinations can carry significant risks to patients- in conjunction with the obvious downside associated with the unconscionable defraudment of the U.S.’s Health Industry.

For one, HealthFair’s advocated ‘basic package’ of six cardiovascular disease screening tests for ‘asymptomatic’ and unselected individuals is allegedly said to be detrimental to patient’s health in accordance with the recognised public medical consensus. This is because such a ‘promotive’ screening process largely relies on fear mongering, which can in itself directly exacerbate one’s health and significantly worsen their long term quality of life.

For example, it is widely recognised that the inevitable ‘false-positive’ test results that will arise as a result of such a screening process will likely lead to significantly proliferated levels of anxiety for patients, and consequently heavily increase their chances of opting for further exorbitant diagnostic procedures and additional ‘treatment interventions’.

Furthermore, such screening is likely to lead to what is known as ‘overdiagnosis’; this where individuals are actively diagnosed with benign health conditions that will never actually cause them any manifestatable symptoms or death. Once again, this is likely to lead to both: a) severely increased anxiety and b) increased unnecessary medical interventions and medical spending.

Finally, medical critics of PPL- whose actions have placed Anthem’s shareholders at monetary risk, have pointed out the obvious unethical element of such a procedure in relation to the Health Industry- violating the ethical principles of: Beneficence, Nonmaleficence, and Patient Autonomy.

The Bigger Picture: A Look at the U.S.’s Health Industry

The aforementioned scandal is reportedly reaping an astounding $ USD 70,000,000 a year in fraudulent Medicare Reimbursements for PPL- at a direct cost to the U.S taxpayers. This is troubling, especially when considering the fact that this issue was initially exposed by the industry’s first whistleblower roughly 10 years ago, and it evidently has yet to be halted. 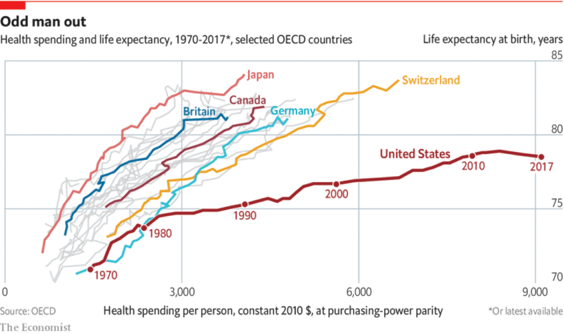 As can be seen by the above graph provided by The Economist, the United States of America has a significantly higher ‘Health Spending per person than the other OECD countries; even so, the country has the lowest life expectancy on the list.

Perhaps, this gap can be heavily attributed to the likely widespread nature of the aforementioned industry scandal, and may be indicative of a prolific ‘misallocation’ of the U.S. taxpayers’ money by fraudulent and unconscionable third-parties.